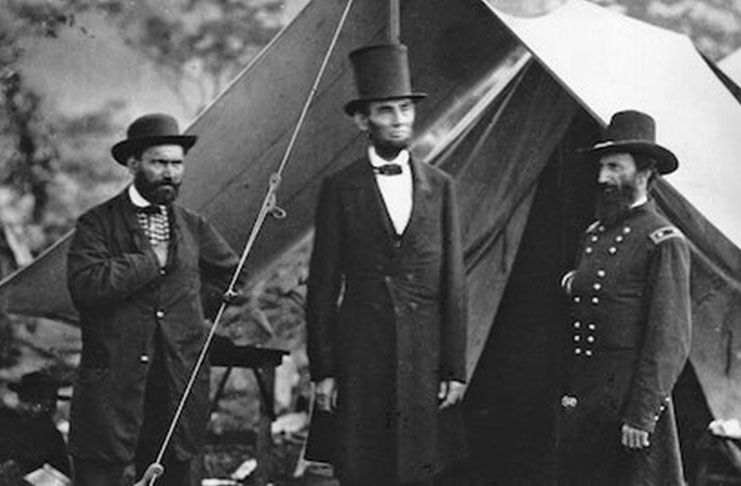 Abraham Lincoln, the 16th president of the United States, is my choice of the person who best represents the pillar of leadership. This is because he led the U.S through a difficult time in their history, as the president when the Union won the Civil War, and he was able to lead his country even while he had many other issues around him. A leader is a person who takes initiative to make people’s lives easier, no matter what things that leader has to sacrifice.

Abraham Lincoln led the United States through the Civil War. The Civil War was a war between the Union in the North and the Confederacy in the South over slavery. The Union was anti-slavery, and the Confederacy was in favor for it. The Union was starting off weak, but Lincoln was able to make many strategic moves to lead his army to victory in 1865. Lincoln was a politician before he became president. He started off as a lawyer who would participate in many debates to help build his image as a reliable politician. After he became the president in 1860 the Civil War started just a few months later in 1861 and his abilities as a leader and a politician were tested immediately. Leadership is the action of leading a group of people or an organization. In Lincoln’s case, his group is the Union. As president, he had to lead his country to victory and make hard choices to achieve his goals. Lincoln was a very flexible leader who lived in the moment and made decisions based off of what was happening right then and there. This made him a good leader because it allowed the people around him to also lead alongside him without him feeling too powerful in everyone’s eyes. Lincoln’s Cabinet was very split and undeciding on almost every topic brought up, but once war broke out, Lincoln was able to bring each of their strengths together to help their country achieve the goal they desired.

The Civil War was a very difficult time in American history. This is because the Civil War was the first war of Americans versus other Americans. This caused Lincoln to have to make split-second decisions that most leaders could not make of there were people’s lives on the line. Lincoln made the choice to demote McClellan to commandeer of the Potomac Army and not General of both armies because he felt that McClellan would not be a fitting General. He also ended up making Ulysses S. Grant as General. All good leaders should be able to make other good leaders, and after Andrew Johnson ended his term as president, Grant also became the president meaning that Lincoln was able to make another leader good enough to become the president. This shows good leadership skills because leaders need to be able to build people that are better then they could be so civilization could advance.

Lincoln was also a good leader through many personal hardships. Throughout the course of the war, he lost 3 of his sons to diseases like Typhoid Fever and Pnuemonia. Even with these hardships going around him he was able to pass the Emancipation Proclamation and freed all the slaves in the United States; he was also able to make the Gettysburg Address to commemorate all the men lost in the battle. Lincoln had to take care of himself as well. As Lincoln as president increased, the physical effects of the war were showing. He no longer looked young like he did when he first became president, now he looked old and worn out. He choose to take care of everyone around him before he took care of himself which is a leadership attribute, because good leaders make sacrifices that may not always benefit them.

I choose Lincoln as a prime example of a good leader, because he was able to deal with more than one hardship at a time. Lincoln was able to lead an army and a country while also being able to get motivate his troops with speeches. He could face hardships within his own family and also be able to take care of the hardships of the slaves in the Confederacy who are fighting for the rights they deserve but are not given. Lincoln was able to take power away from people who did not need it and share that power to other people to help him lead his country. He was able to take the people he once controlled and made them better and let them rise to power in their own ways. Lincoln was able to make decisions as the situation came to his attention because he believed that he should not have to control what might happen in the future and that you should just be able to deal with the problems that are presented to you at that time. He was able to bring people who never agreed on many topics, to work to achieve the same goal that was desired. This is why I chose Abraham Lincoln as the person to represent the pillar of leadership.

Colosseum Group is a group of companies that have a single mission to empower people and generate opportunities.

We're so excited to start implementing this in our company!

Our Founder & CEO, @RMunnanooru is now an official member of @ForbesTechCncl

This is an extremely happiest moment for us, Whistlers. 🥳

We thank YOU for the amazing support throughout our journey. 😊

Our Chairman and Leader always inspires the Colosseum Group team. We are not surprised that he has made such strong impressions on others. Thank you @shailutips for continuing to push us all forward. #colosseumgroup #aim #ventures #partners #reflections

Thank you so much to the Centurions that helped make this project so successful! We know the kids will be very happy to receive such a kind gift! https://news.colosseumgroup.com/colosseum-foundation-book-delivery/ #colosseumfoundation #foundation #centurions #colosseum